Join Us in Revolutionizing the Plasma Industry 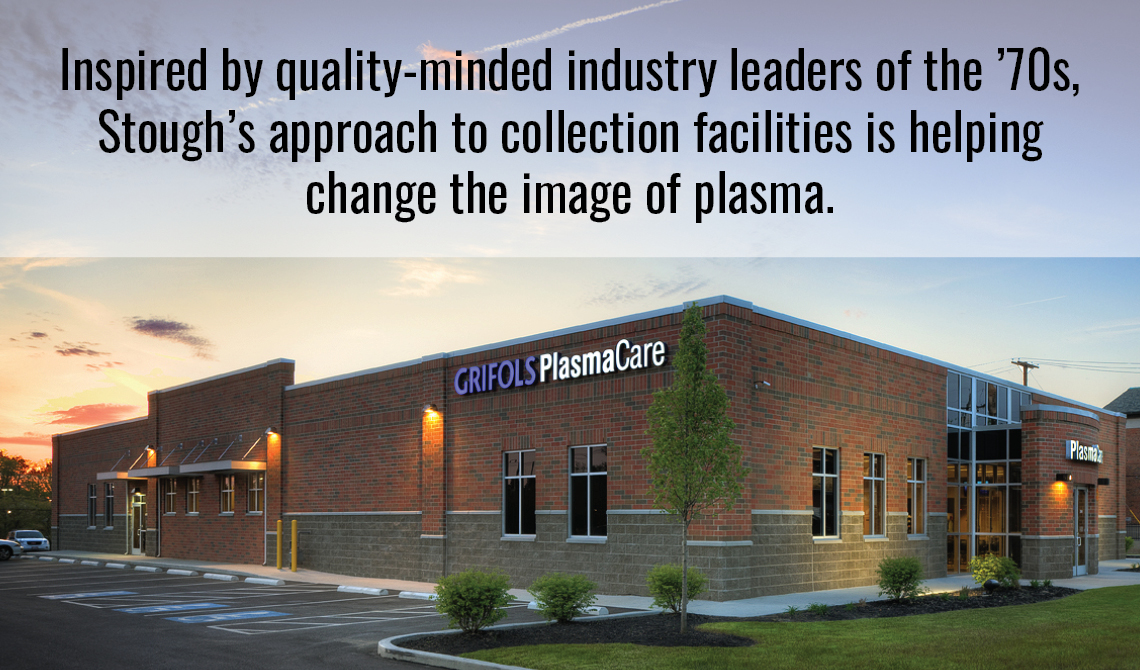 When he first started at PlasmaCare in 1969, Michael Stough worked in a poorly-lit office at the back of a grubby facility in a rough neighborhood.

Then he got involved in construction for the company, watching drivers of the industry advance collection concepts over the decades. Today, Stough Group’s purpose-built, free-standing centers have taken that evolution to the next level.

Partner with us in continuing to improve the plasma business. Call today to discuss your next new facility. 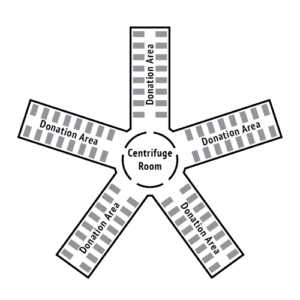 As he became more and more involved in plasma center construction and operations, Michael started to believe he could change the image of the industry, enhance production and raise profitability.

He looked at what the most forward-thinking, best-run collection companies were doing:

• Plasma Alliance, led by Dr. Nelson of Knoxville, was one source of inspiration. One of Nelson’s associates told him early on, “You could make a lot of money here.” Nelson responded, “No, we want to be the best.” He trusted that if the goal was highest quality, profitability would follow, and it did.

Here’s just one example of how Nelson’s attention to quality went down to the smallest detail: he created a new center design, with the Centrifuge Room as a hub in the middle and Donation Areas as spokes around the hub.

This was not the least expensive design, but in the long run, it was the most cost-effective thing Nelson ever did: it saved hours and miles of walking for the staff, making production safer and more efficient. When competitors could process 600 donations a week, Nelson could process 2,500. His investment in a radical idea led to financial success.

Another quality breakthrough of Nelson’s involved transportation. He bought his own refrigerated trucks to transport plasma, because there was no consistency at the time for keeping it at a safe temperature for preservation during transit.

• Another example of new ideas that rose out of visionary thinking: a Texas company led by Dr. Radding created a playroom for donors’ children and hired child care professionals to staff it. This was a brilliant idea, because centers have fixed costs. If they can see more donors, they make more money. 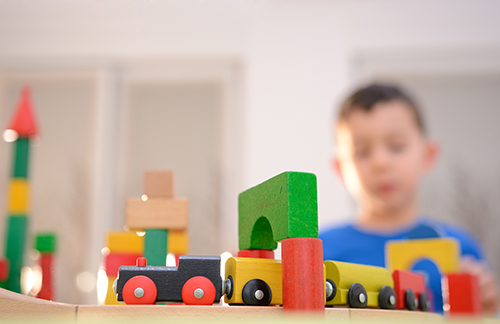 An industry-wide definition of quality is what percentage of donors are women. When there are more female donors, centers are cleaner, the waiting area is more appealing, and there is less profanity. The childcare center enticed women donors to Dr. Radding’s centers, improving plasma quality, overall operational quality and profits.

• A third example, of particular inspiration to Michael, was Baxter, part of American Hospital Supply, which built the first free-standing plasma collection facilities. They earned a reputation for the best quality AND came to lead the industry in production. They placed centers in small towns, where there was no competition to steal their donors or sully their excellent name.

From these innovators, Michael saw that striving to be the best meant going “all-in”— reaching for the highest standards in facilities and all aspects of operations.

In 2006, Michael sold PlasmaCare, which allowed him to maintain a constant focus on improving the functionality and quality of plasma facilities.

While much in the industry has changed for the better, Michael feels he has just begun.

If we build for you, you will experience all the positive attributes PlasmaCare enjoyed under Michael Stough’s leadership:

A. A more pleasant environment, which leads to lower turnover of donors and staff. It wasn’t just the buildings that made the difference. PlasmaCare took a people-first attitude that involved treating staff and donors as valuable parts of the operation. The workforce became more stable, which in turn was more welcoming to donors. Donors who felt more welcome returned more often. That led to higher productivity at lower costs.

B. Better neighbors, a heathier donor base, and more female donors. It turned out not to be true that plasma centers had to be in depressed areas to draw donors. A Stough-built center is strategically located to serve an up-and-coming area near a university or medical complex.

It draws a healthier donor base, which reduces the viral marker rate, and more female donors, because women feel safer going to a building with good exterior lighting and adequate parking.

Ideally, the manager of this clean, attractive facility becomes an active part of the community. As an asset to neighborhood, the center is much less likely to get “zoned out” by a city that does not want the crime and loitering associated with the typical center in a failing strip mall.

C. A better reflection on your brand. When your plasma collection facilities are assets to the neighborhood, they reflect positively on your brand. You don’t have to give your centers a different name to hide the fact that you run them. The collection part of your business will enhance, not detract, from your reputation. 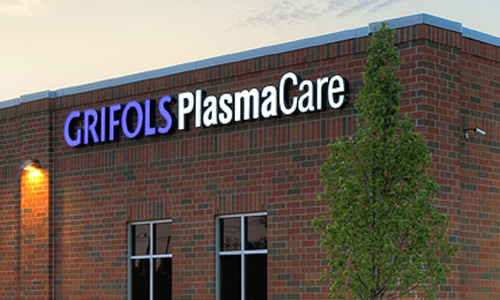 But we never rest on our laurels. We continuously innovate and improve, keeping our finger on the pulse of the industry’s evolution. 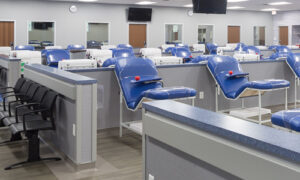 3. Better for the bottom line

In addition to being more inviting and productive, a new building is better for the bottom line than a retrofit of a space built for another purpose. Here’s why:

• A lower cost of operation and a longer economic life
• Stough lease terms are more favorable, or you can buy
• The buildings are well maintained by a landlord with a vested interest
• The space is built specifically for plasma collection. It is constructed to be adaptable for future design modifications that may be needed due to new collection methods or regulation changes. 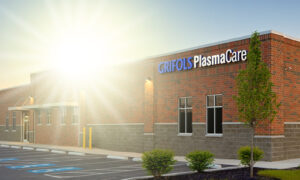 4. A brighter future for the industry

Plasma collection is critical to the production of a wide range of pharmaceuticals that save thousands of lives every year. The industry keeps growing, and we have been proud to be part of that growth —along with a higher industry-wide emphasis on quality.

Michael has proven that “best” doesn’t have to be most expensive. It is what delivers the most value. We see a bright future for the industry where that concept becomes universal.

WORK WITH STOUGH TO BE THE BEST: ENHANCE YOUR CURB APPEAL, MAKE THE INSIDE OF YOU CENTERS AS WELCOMING AS THE OUTSIDE, AND BECOME AN ACTIVE PART OF THE COMMUNITIES YOU SERVE. FINANCIAL SUCCESS IS SURE TO FOLLOW.

To streamline delivery and control costs, we take a prototype approach when possible, engage local civil engineering consultants for each project, and establish a working relationship with the local governing authority.

Stough Group operates http://www.StoughGroup.com. This page informs you of our policies regarding the collection, use and disclosure of Personal Information we receive from users of the Site.

We use your Personal Information only for providing and improving the Site. By using the Site, you agree to the collection and use of information in accordance with this policy Information Collection, Use, and Sharing We are the sole owners of the information collected on this site. We only have access to/collect information that you voluntarily give us via email or other direct contact from you. We will not sell or rent this information to anyone.

We will use your information to respond to you, regarding the reason you contacted us. We will not share your information with any third party outside of our organization, other than as necessary to fulfill your request, e.g. to ship an order.

The security of your Personal Information is important to us and we take precautions to protect your information, but remember that no method of transmission over the Internet, or method of electronic storage, is 100% secure. While we strive to use commercially acceptable means to protect your Personal Information, we cannot guarantee its absolute security.

We use "cookies" on this site. A cookie is a piece of data stored on a site visitor's hard drive to help us improve your access to our site and identify repeat visitors to our site. For instance, when we use a cookie to identify you, you would not have to log in a password more than once, thereby saving time while on our site. Cookies can also enable us to track and target the interests of our users to enhance the experience on our site. Usage of a cookie is in no way linked to any personally identifiable information on our site.

This website contains links to other sites. Please be aware that we are not responsible for the content or privacy practices of such other sites. We encourage our users to be aware when they leave our site and to read the privacy statements of any other site that collects personally identifiable information.